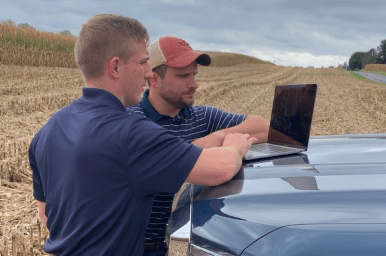 Organisms cluster beneath a field’s surface by the billion. What are they up to down there in the dirt? Which ones help crops grow – and which ones kill them?

Frankly, we only have a tiny fraction of a clue. But crop scientists are getting more confident that a more usable knowledge base of these ecosystems is round the corner. The cost of precision microbiome sensors is falling, while AI that can detect patterns is improving. That could lead to significant improvements in yields, and there’ll be value in whichever company can really make sense out of that handful of dust.

One such bacterial cartographer prepared for this dirty work is Emeryville, California’s PatternAg, a biological analytics company mapping and measuring microbial DNA in crop soil.

Today it announced the close of a $15 million funding round led by Valor Capital Group and Ospraie Ag Science, with participation from Founders Fund and the International Finance Corporation. This is the first outside funding for PatternAg, which was incubated at The Production Board, a San Francisco-based investment foundry focused on building new companies in agriculture, food, and the life sciences.

Dave Friedberg, who set up The Production Board after his runaway success at Climate Corp, is serving as chairman of PatternAg, which he now sees as “significantly improving efficiency in agriculture through metagenomics and the application of discoveries in the soil microbiome.”

Overall PatternAg’s thesis is that precision microbiome engineering can enhance — if not supersede — conventional agricultural inputs, leading to substantial improvements in efficiency, sustainability, and soil fertility. Other companies taking a similar approach include the UK’s FungiAlert and PES Technologies, or California’s BiomeMakers and Trace Genomics. [Disclosure: Trace Genomics is a portfolio company of AgFunder, AFN’s parent company.]

But the question is how to apply this reliably at commercial scale, and get out of experimental futurist mode. PatternAg’s first step in this direction is a crop protection product that advises farmers on what crops to treat and where, based on DNA mapping at high resolution.

Rooting out the corn rootworm

Armed with PatternAg’s insights into next season’s risks, Midwest corn and soy farmers can apply recommended protective measures to maximize their yield or save money on inputs when those risks are absent. The team has identified corn rootworm and soybean cyst nematode as the most costly pathogens.

To find out more, AFN spoke to PatternAg CEO Rob Hranac, who likens his firm’s soil scans to a visit to the doctor. Too many farming decisions, he said, have been made “flying blind” when it comes to impacts beneath the ground, which can have huge effects on yields and long term soil health.

“It’s a diagnostics technology,” he said. “A doctor’s not going to write you a prescription without doing any diagnostics.”

While saying the firm is “agnostic” to which fertilizers or pesticides a farmer ends up using — chemical or biological — he did say both courses of treatments would need evidence to tell what was actually working, and even predictive technologies for what will be needed next season.

In its first season in market the team signed up a cross section of farmers in seven Midwestern states, collectively farming half a million corn and soybean acres, Hranac said.

PatternAg claims that its product can increase profits for its customers by “up to $50 per acre” by helping them optimize their inputs.

Illinois farmer Andy Houzenga said in a statement that he wouldn’t have got his crop protection treatment right without it: “My treated soybeans yielded higher, and I would have never made that investment had I not known what was living in my soil.”

The startup’s new backers see this as an investor category to watch in general. “Leveraging recent advancements in DNA sequencing, PatternAg represents a major opportunity in computational agriculture,” said Valor partner Michael Nicklas in a statement. “Mapping the microbiome at scale will enable us to understand how soil ecosystems drive agronomic outcomes.”

A bridgehead to biologicals

The PatternAg team believes there will be a time when it can widen its focus to new crops, applications, and geographies. Equally important will be its role in greenlighting biological solutions.

The startup will use the funds to scale its biological analytics offering to both US and international markets, including Brazil – the largest producer of soybeans and third largest producer of corn worldwide. It will also continue to expand its product offering to help growers better manage soil health and nutrients within their operations.

“We are just scratching the surface of what we can do with our metagenomics technology platform,” Hranac said. “Today, from each soil core we pull, we use only 1% of the genetic data we sequence to drive our core crop protection product. We look forward to unlocking the power of the other 99% for growers.”