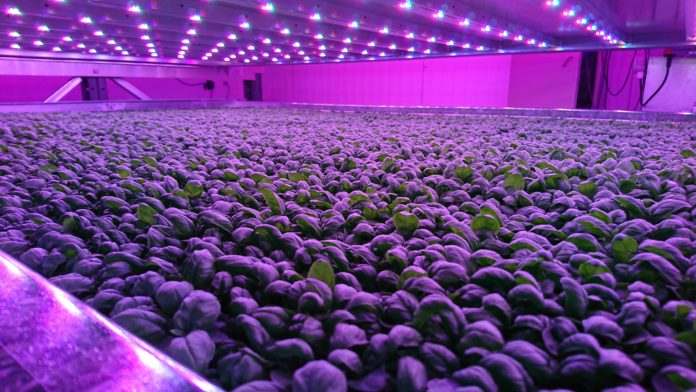 Scotland-based agtech and lighting solutions company Intelligent Growth Solutions (IGS) announced today a further raise of £1.6 million (~$2 million USD) in what’s the second and final close of its Series A round. Agtech investor Ospraie Ag Sciences contributed the bulk of the funding, with participation from Agfunder. This brings IGS’s total Series A funding and total funding overall to £7 million.

In June, IGS raised a £5.4 million Series A round for its “farm in a box” indoor vertical farming system, which uses patented IoT tech to automate many aspects of running a vertical farm, from loading and moving grow trays to adjusting water levels and lighting to monitoring overall crop health.

In particular, the IGS system promises to help vertical farming companies bring down energy costs associated with LED lighting, one of the most expensive parts of running an indoor vertical farm. On its website, IGS says it can increase LED efficiency by up to 50 percent versus other indoor grow environments. The company has two patents in this area, one granted and the other pending.

IGS’s farm, located outside Dundee, is also Scotland’s first commercial vertical farm, and investor Ospraie’s first venture into that country as well as into the indoor farming market.

IGS said in a press release it will use the funds to “expand its market presence” through global sales operations for its lighting system, which the company expects to deploy in early 2020.

IGS will face plenty of competition as it expands in the vertical farming space. In 2019 so far, an Australian company called Vertical Farm Systems raised $1 million for its automated indoor farming technology and Eco Convergence Group rebranded as Kalera and broke ground on a massive vertical farm outside Orlando, FL. As well, there’s been plenty of movement from commercial vertical farm heavyweights like New Jersey-based AeroFarms as well as new entrants like Fifth Season, who just announced a robot-powered farm this week.

IGS’s key differentiator right now is its lighting system. As it deploys its solution in the next year, we’ll see if that’s enough to keep it at the top of the ever-rising competition in the vertical farming market.